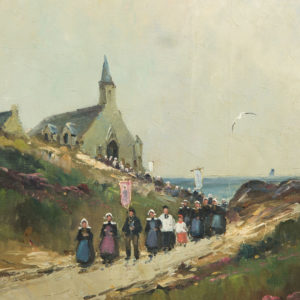 Each of us has a story. Each one is a unique work of art, “created in Christ Jesus for the good works that God has prepared in advance.” These words, based on St. Paul’s letter to the Ephesians, wonderfully describe our foundress, Saint Jeanne Jugan. She began life at a difficult moment in history, with very few gifts, resources or possibilities according to the standards of the world. But with what she was given, she allowed God to work miracles — little by little, day by day over the course of many years, Jeanne allowed him to prepare her to create a work of charity which responded to the needs of her time, and which has continued to bear fruit 225 years after the first chapters of her life story were written in a tiny fishing village in a remote region of France.

As we celebrate the 225th anniversary of the birth of Saint Jeanne Jugan, we pause to consider the context into which she was born, and the various factors that helped to mold her into the person God intended her to be. In any life it is never just the circumstances of one’s birth or one’s natural gifts that matter. The beauty the clay takes in the hands of the Divine Potter is what really counts for eternity. Such is the story of our humble foundress … highlighted — but not constrained by — the following six themes. 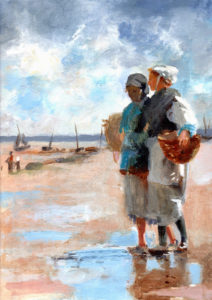 A daughter of Brittany. Born in the village of Cancale, Saint Jeanne Jugan was a proud daughter of Brittany. The region was settled by Celtic migrants in the fifth and sixth centuries AD, and came under French rule in the 16th century. But it was only after the Revolution that Brittany officially became part of France. The Bretons have always been proud of their history and unique culture, which has more in common with the Welsh and Scots than the Franks who came to dominate the rest of France; many identify as Bretons before calling themselves French. In Jeanne Jugan’s time they were a rugged, independent and deeply religious people.

French Revolution. Jeanne was born on October 25, 1792, at the height of the French Revolution. She was baptized the day of her birth by a priest who had sworn allegiance to the Civil Constitution of the Clergy. Priests who refused to sign the oath of loyalty were forced into hiding or killed. The parish church of Cancale had been transformed into a hospital, and then a fodder-store for troops. Several months after Jeanne’s birth a royalist and peasant counter-revolution broke out in Brittany. Thousands were massacred. For the next eight years an atmosphere of violence and fear prevailed in the region. This was the terrifying context into which our foundress was born. 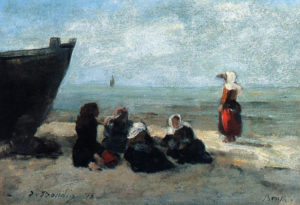 Rugged land, awesome sea. The landscape of Brittany was a patchwork of green and gold green fields, thatched roofs, dirt roads and jagged seaside cliffs; the climate was generally damp and misty. Cancale was famous for its oysters; thanks to their hearty diet the local people were exceptionally robust. Three quarters of the population made a living from the sea, including Jeanne’s father. He was on a fishing expedition in Newfoundland when she was born, and then four years later he was definitively lost at sea. A fisherman had to be missing for seven years before he could be declared dead, so Jeanne, her mother and siblings went on hoping for his return for many years.

Family life. Life in Cancale was austere and mothers prepared their daughters for the day when they would have to manage in the absence or loss of their husbands. Following her father’s disappearance Jeanne grew up as one of five children in a single-parent household; three older siblings had died in infancy. With Jeanne’s mother at the helm, the family toiled together to make ends meet. 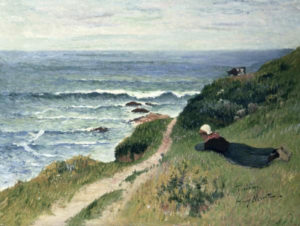 As a youngster Jeanne pitched in by pasturing the family’s small flock on the bluffs overlooking the Bay of Mont Saint-Michel. At the age of fifteen or sixteen she went to work as a kitchen-maid for a wealthy family, where in addition to cooking, she was involved in helping the poor and visiting lonely old folk. 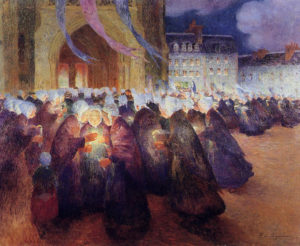 Solidarity. Growing up, Jeanne witnessed the courage and ingenuity of the women of Cancale. They knew how to help one another, taking up a collection from house to house when a family came upon hard times. Whoever accepted the charity of others knew that one day she herself would be out collecting for someone else. Jeanne witnessed the faith of these proud, somewhat rough women who often gathered in a small chapel by the sea to pray for their absent husbands and sons. 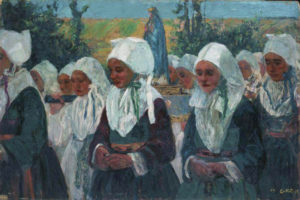 Faith. The cornerstone of Jeanne Jugan’s life was her profound faith. Although public worship was prohibited during her early childhood years, she learned her prayers and the basics of her Catholic faith from her mother and a band of devout women who traveled from home to home secretly imparting the faith. As a teen Jeanne attended a parish mission preached by a band of Jesuit missionaries. She participated fervently and joined the sodality for girls established by the missionaries. 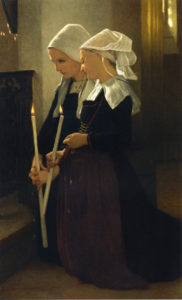 In 1817 Jeanne’s two sisters were married and she decided to leave home in order to start a new life in a neighboring town. She felt called to follow a different path from that of her sisters, refusing a marriage proposal and telling her mother, “God wants me for himself; he is keeping me for a work which is not yet founded.” Before leaving home she divided her clothing into two portions, giving her sisters the prettiest items and keeping the simplest things for herself. She settled in Saint-Servan, about fifteen kilometers from her hometown, where she discovered a world of poor and suffering people … and, eventually, the work for which God had destined her.

Jeanne deepened her prayer life and spent herself in the service of the poor. Like the wise virgins who kept their lamps lit as they waited for the Master’s arrival, she remained vigilant and prepared herself for the Lord’s visitation … 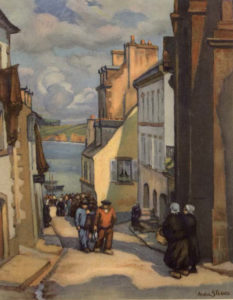 Finally one day in 1839 he came in the person of a poor, blind elderly woman in need … and the world would never be the same. Although she came from an obscure village, in spirit Jeanne traveled as far as her compatriot Jacques Cartier and the other Cancalais who let the sea carry them to new adventures and new worlds.

Today the Little Sisters of the Poor can be found in thirty-one countries around the world, striving to serve the elderly poor with the same spirit and the same heart as Saint Jeanne Jugan.