No nativity scene is complete without the shepherds and animals. Saint Jeanne Jugan would have loved the shepherds and identified with them. They represent the poor, simple folk, the little ones, as she used to say. They were the first to come to the stable to worship the Lord. As soon as they receive the angels’ announcement they drop everything and go… in all faith and simplicity. They aren’t held back by all their possessions or their preconceived notions, so they are able to receive the Good News of great joy fully into their hearts. 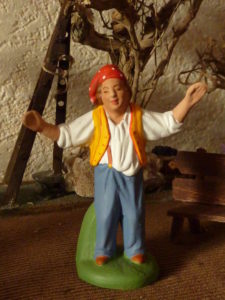 The shepherds are among those Jesus was referring to when he said “I praise you, Father, Lord of heaven and earth, for what you have hidden from the learned and the clever you have revealed to little ones.” They got it right — when they received the good news of salvation they immediately dropped everything and ran to adore the Lord.

One of my favorite Christmas characters is found in traditional French nativity villages. His name is Ravi, which means “thrilled,” or “delighted.” This little figure has his arms raised to express his excitement at the birth of Christ. Some call him the village idiot or a simpleton, which is ironic since he is considered to be the first to see the baby Jesus and is proclaiming the good news to the rest of the village.

Saint Jeanne Jugan was not unlike Ravi, for she too was thought to be rather simple by some, and yet she had a profound prophetic intuition as foundress of our congregation. And like the shepherds she appeared in the limelight for a moment and then retreated back into obscurity. But like them, she will be forever remembered as one of the little ones to whom the Lord revealed his mysteries.

This week try to identify with the shepherds in their simplicity and openness to the good news of God’s love. Is something holding you back from opening your heart more completely to God? or from loving others, especially your own family? Ask him to show you what it is and to free you of this burden so that you will able to run to him with joy on Christmas. At the same time, reach out to someone who is less fortunate than yourself with a gesture of hospitality. Be a messenger of God’s love by bringing someone in out of the cold and warming their heart.