As we endure these difficult days in the life of our Church, I’ve been thinking about the potential for committed Catholic women to bind wounds and buoy up the spirits of the faithful. Saint John Paul II once commended women for helping to make “political and economic structures ever more worthy of humanity” and at the close of the Second Vatican Council Pope Paul VI called on women “impregnated with the spirit of the Gospel” to aid humanity and “save the peace of the world.”

In celebrating the 150thanniversary of our congregation’s arrival in the United States, I’ve been deeply moved by the extraordinary women who made the expansion of our religious family in America possible. First, of course is our foundress, Saint Jeanne Jugan, who put out into the deep with little education and few resources – but with great audaciousness – to establish a new work of mercy in the Church.

Then, there are the courageous Little Sisters who implanted our congregation in America. Many of them had never ventured beyond their homeland until they boarded a ship bound for the New World. Most of them spoke no English when they arrived, but they were full of fervor and indomitable charity.

As they set down roots in America, our Little Sisters were supported by a host of women who devoted themselves to building up the Kingdom and healing society’s wounds in the wake of the Civil War. The most prominent among them was Mrs. Sarah Peter, the daughter of the sixth governor and first U.S. senator from Ohio. After being widowed twice, she undertook a life of philanthropy. 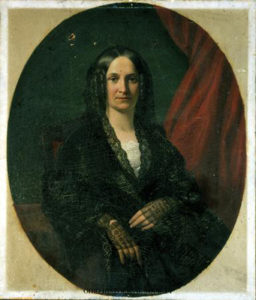 Raised as a Protestant, Mrs. Peter was impressed by the fervent Catholics she encountered during visits abroad. She embraced Catholicism and turned her attention to bringing religious communities from Europe to Cincinnati.

In 1857 her first request for a foundation of Little Sisters in the Queen City was declined by Mother General, who felt that the congregation was still too young for such an undertaking. She would have to wait eleven years, but in October 1868 Mrs. Peter was on hand to welcome the Little Sisters to Cincinnati and lend her wholehearted support to their mission.

Another notable woman who showed herself an early benefactor of our congregation was Emma Drexel, the second wife of prominent banker Francis Anthony Drexel. Mrs. Drexel and her three daughters opened the family home to the poor of Philadelphia twice a week to distribute food, clothing and rent assistance to the poor. In 1869 her middle child Katharine, the future saint, led her sisters in selling all their Christmas gifts and giving the proceeds to the Little Sisters.

The women mentioned so far were from wealthy, prominent families, but the poor also made their contribution. 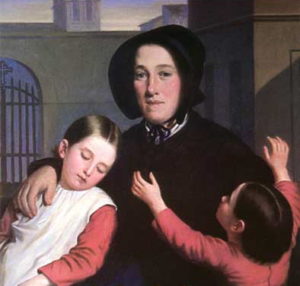 Margaret Haughery of New Orleans was an illiterate Irish immigrant who lost both her husband and her only child at the age of 23. Rather than bury herself in sorrow, Margaret devoted herself to the care of orphans at the New Orleans Female Orphan Asylum. She purchased two cows to provide the children with milk, and then acquired a whole herd, which she developed into a prosperous dairy business. Margaret also purchased and ran a hugely successful bakery, from which she supplied numerous orphanages and old age homes in New Orleans, including our own.

Our history is dotted with stories of women who assisted the Little Sisters in extending our mission to the elderly poor across America. Many remain nameless – from the schoolgirls who donated a loaf of bread and a few dishes, to the maids in Boston who gave the shawls off their backs and the countless women religious who offered our Little Sisters hospitality and invaluable assistance upon their arrival in each new city.

Whether known or unknown, all of these women gave the best of themselves for the building up of the Kingdom of God in America. At this moment when our hearts have been broken and our faith tested, may they bolster your hope and inspire you to do all you can to contribute to the uplifting of the Church.

Sister Constance Veit is director of communications for the Little Sisters of the Poor.